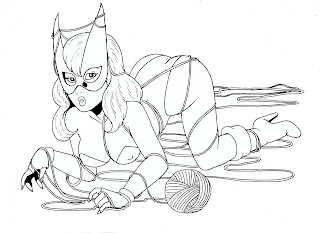 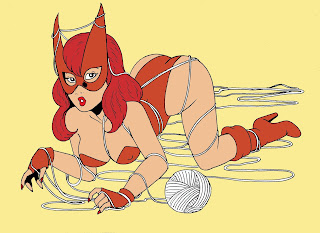 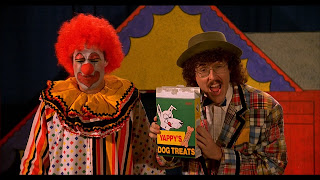 UHF was basically a live-action cartoon of the Tex Avery school. Each scene was a wacky gag, parody, or slapstick silliness. The result is one of the most enjoyable, good-time viewings one could hope for. "Weird Al" Yankovic makes his motion picture debut as George Newman, constant daydreamer and career loser who finds his fortune turned around when he's placed in charge of tiny TV station U-62. When his failing station suddenly becomes a massive success, it places him at odds with tyrannical network executive Kevin McCarthy. I really can't describe the film, other than to say it's wall-to-wall fun and laughs. Unfortunately, it had the misfortune to premiere the same weekend as several large films, including the Disney blockbuster HONEY, I SHRUNK THE KIDS. Unable to find an audience, the film flopped and "Weird Al" didn't get any more starring features. The film found it's audience on video and (ironically) on television. Today, it's considered a cult classic.
Posted by Rock Baker at 3:53 PM No comments: 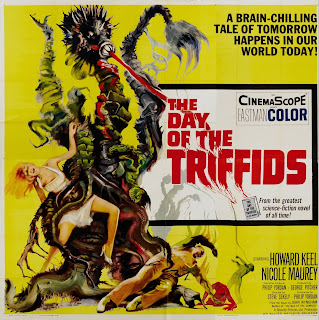 THE DAY OF THE TRIFFIDS tells of a double-fold calamity that strikes the world. First, a meteor shower leaves nearly every human being blinded. Simultaneously, curious small flowers that came to earth from space suddenly begin to grow into carnivorous mobile plants known as Triffids. The Triffids increase in number as mankind does the opposite, while a handful of survivors try to reach safety. Based on the popular novel, the film originally ran too short. A brilliant subplot was constructed concerning some married research scientists stationed on an isolated island. When the Triffids appear at their door, they must find some means of combating them. This story weaves through the main plot, reflecting it and yet entirely apart from it. Kudos to the writers. Although the film was a hit, and was a pretty fine feature, critics felt it weak tea compared to the more politically charged novel. A more faithful version was created as a BBC teleserial in the 1980's. Meanwhile, it's been pointed out that the quasi zombie movie 28 DAYS LATER was basically an adaptation of the novel which replaced the killer plants with insane animal-men.
Posted by Rock Baker at 5:49 PM No comments:

ATTACK OF THE MONSTERS was part of the Gamera series, and is probably the wackiest of the lot. This time, some young boys find a flying saucer and climb in before it takes off for another planet in Earth's orbit on the other side of the sun. Once there, the boys find the planet inhabited only by a pair of comely women in green tights. These space-women plan to devour the children to incorporate their knowledge and then move to Earth! Gamera flies to the rescue, but must contend with a knife-faced monster which guards the alien city. Wow. Words really can't describe it. For some reason, this has probably been the entry which has seen the most play. AIP-TV released the film to US television where it became a staple of UHF monster shows. In the 80's, Sandy Frank released a different version of the film as "Gamera vs Guiron" to home video. This version was used on Mystery Science Theater 3000, where it became a favorite episode of many. The film finally made it to DVD in a scope format which offers both dubs, as well as the original Japanese language track. Wacky stuff, even by Japanese monster standards! 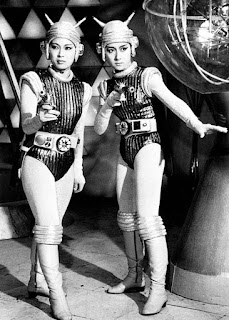 Posted by Rock Baker at 1:46 PM No comments: 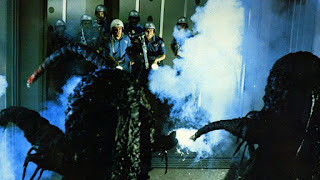 From the I Have No Idea Why It Has Such A Bad Reputation file, the wonderful pulp science fiction adventure THE GREEN SLIME was an international co-production between America, Japan, and Italy. It manages to capture the distinct taste of all three nationalities at the same time, making for a surreal but quite enjoyable viewing experience. A massive body is headed on collision course with Earth, and man-of-action Robert Horton leads a team to plant explosive charges on the approaching satellite. (This part of the plot was basically remade by competing movies back in the 90's. One was the more somber and ultimately listless DEEP IMPACT. The more successful film was the gung-ho ARMAGEDDON, which drew the ire of critics for being too much in line with public tastes -which right there sums up the main problem with film critics.) While on the alien body, a living green slime is discovered. This substance is unknowingly carried back to space station Gamma 3, where it grows into a hideous army of electric monsters. In a sense, the film is a space-bound version of THE NAVY VS THE NIGHT MONSTERS. The title's pop immortality was assured by the extra-groovy theme song. A life-long favorite of mine.
Posted by Rock Baker at 5:42 PM No comments:

Back cover art for issue 11 of Cartoon Cuties 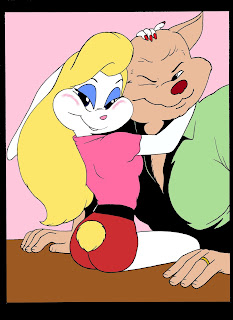 Posted by Rock Baker at 2:32 PM No comments: 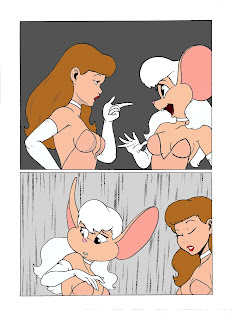 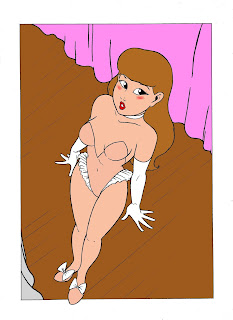 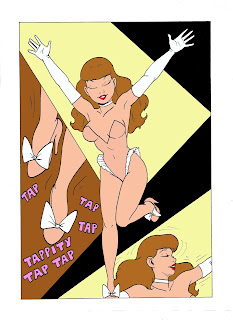 Posted by Rock Baker at 6:18 PM No comments:

Rock Baker
I'm a cartoonist by trade. My specialty is cheesecake cartooning (what they call 'good girl art' these days). My ultimate aim to make motion pictures. My first step in that direction was to co-write the Joshua Kennedy space opera VOYAGE TO THE PLANET OF TEENAGE CAVE-WOMEN, reportedly, a film that's done rather well for our distributor. Jesus Christ is my Lord and Salvation. No action a man can take can make him righteous or buy salvation, it comes only through the redemptive blood of Jesus the Christ, Son of God. Christ took our place and all our sin and unrighteousness to give us His place and His righteousness, and perfect standing before God almighty. Man can do nothing to achieve this righteousness, it comes only by receiving Christ's righteousness, freely given to all who believe on His finished work. "But ye, beloved, building up yourselves on your most holy faith, praying in the Holy Ghost, keep yourselves in the love of God, looking for the mercy of our Lord Jesus Christ unto eternal life." -Jude 1:20-21